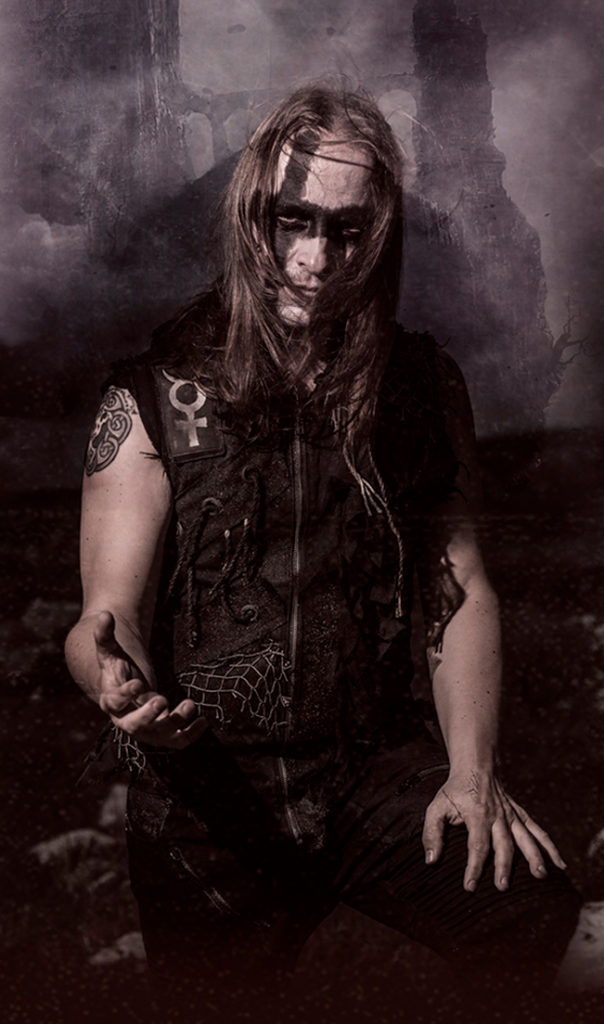 When did you start playing?
At 11 some classical guitars but I hated it. I started with electric guitars at 14.

Why did you start playing?
I wanted to become a metal musician

First album bought?
Helloween “Keeper of the 7 keys pt 2” in 1989 for metal albums but I think the first ever was something from Madonna.

Favourite EK songs?
Seasonspeech, Trows Kind, King of the Elves, The Solitaire, Draugen’s Maealstrom, Witches Gather … but this can change every time.

Which band would you like to open up for?
Helloween, Children of Bodom, Nightwish

Craziest situation on/off stage?
RAR Festival ’05 (Germany): everything happened during the gig: the stage was full of people doing stage diving and we stopped the show several times to be sure that nobody was injured. At a certain point one guy was trying to climb the big stage speakers to stage dive from there and he felt off bringing one of the top big speakers with him. This was falling on to my head, and in the very final moment I saw it and had the reflex to move from there. The speakers felt on to the guitar pedalboard and broke it in two. It wasn’t mine, somebody borrowed it to me!

Most embarassing moment of your career?
There was a pretty embarrassing situation at Pestpop 06 (Gorlan, remember?) but cannot tell more!! Or when I do bad errors on stage!

Favourite movies / actors?
“Silence of the lambs”, “Dead poet society”, “Seven”, “Sleepy Hollow”, “Braveheart”, “Lord of the rings”, “Shutter Island”, “Deep Red”, “Suspiria”, “The Others”, “The hours”, “Back to the future”, “The prestige”, “Eyes Wide Shut”, “The wolf of Wall Street”, in general movies from Tim Burton and David Lynch and an uncountable number of horror movies being a total horror maniac / Emma Stone, Ryan Gosling, Julianne Moore, Anthony Hopkins, …

What do you like to do on your freetime?
Well, basically relaxing since I had not much for this. Usually I hang out with some friends, then going to the cinema, see some live gigs, reading, etc. Obviously writing music